I would like to show you those three drawings I did a fews weeks ago in France.
The first one was made with brush pen. It was a farm I could see when I was getting up from my tent. Behind the building, the "Mont Dore" mountain appear in the far distance.
The second sketch represent the old medieval city "Saint-Flour", a stop on the road of Compostelle's pilgrinage. I have done this sketch quickly ( with ink pen) because it was freezing.
The third sketch is located in south of France near the Spanish border. This is the "Salses" Fortress, built at the end of the 15th century by the Spanish soldiers to prevent invasion from French. Finally, after fews battles (the place became definitivly French in 1642) , the peace declared between the two countries (in 1659) moved the border line few kilometers from there and the fortress lost his stategic interrest.
The Fortress of Salses is a true specimen of transition between the Medieval castle and the modern fort.
The drawing was done with brown ink and pen (actually, a sort of metallic quill, don't know exactly the name in english, but an extraordinary tool for drawing!!).

So, I hope you will appreciate them. 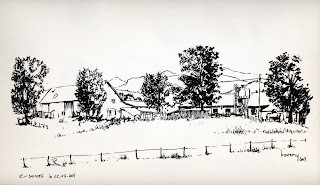 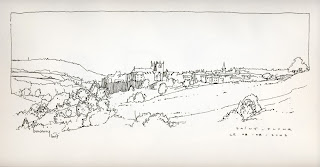 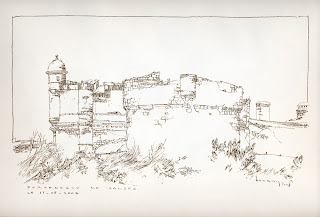 These are nice Guillaume! good line work, good composition sense.
I hope it's all Ok in Madrid or wherever you are now!