Hi,
That´s it, I´m an artist ! I finally jump in to the world of Moleskine.
The paper is pretty soft and it´s a real pleisure to draw with a 6B pencil. Format are interesting too if you consider to make a double page sketch. Otherwise on single page it´s a too small for me.
Last week we spent a few evening on the beach with the typical Norvegian picknic package: Barbecue, sausage and drink.
It was already 9:30 or 10:00 pm when I noticed how the people were pushed away from the beach by the shadow. I had the impression to see a large wave of shadow cleaning the beach.
The boat I draw on the third sketch has been reconverted as cafe-theatre. They probably built some extra deck because the proportion are really unusual. In the meantime they are so interesting to draw.
The next sketch represent the town hall (called Radhuset) seen from the fortress. The architecture of this building is difficult to appreciate (personaly, I don´t) but the interior has been decorated with huge impressive painting from the beginning of the 20th century. It´s also the place where every year in december the Peace Nobel Price ceremony take place.
The two last sketches were done with the "artpen". The line drawing was too similar than my previous series of sketches and I was looking for some new tool I could explore. I stopped for now to use this pen but I´m thinking to use it for thumbnail studies lately.

That´s all for now . A special thank to Abel who offered me this first Moleskine sketchbook a few months ago. Now I´m addict. 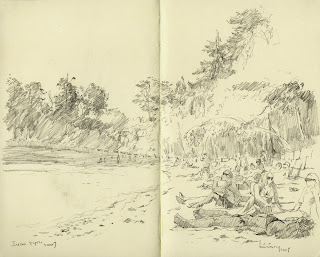 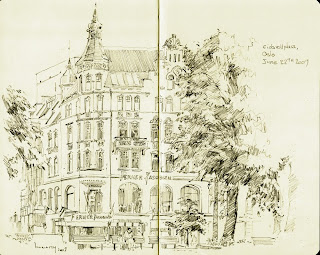 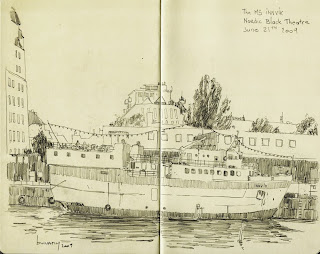 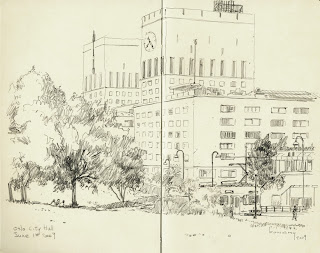 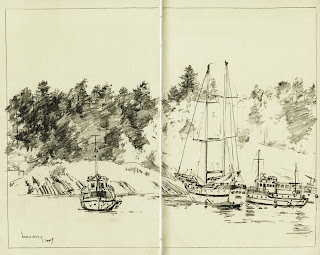 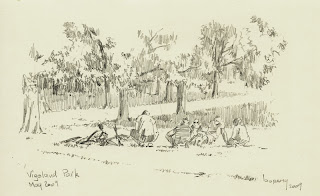 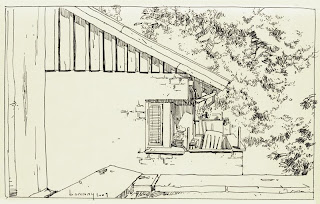 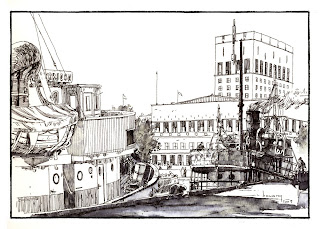 the last one is my favourite, I love the effect of the ink and water :)
did you use a funtain pen?

Yes Andrea, I used an "artpen" from Rotring. Unfortnatly, the ink is difficult to keep in control when you wash it.
Guillaume.

Thank you for all the lovely pencil sketches. They charged my own inspiration.

Sketches keep looking better and better!
Rotring Artpen? I used to hate that tool! :) Because of the ink, of course. I made tons of comics as a teenager with one of those, but everytime I rubbed my hand over the paper everything got dirty :P

Great to hear from you Guillaume! Love your work...beautiful! Long live 6B!

Very cool Guillaume! These moleskin sketches are fantastic. You will have to try their watercolor sketchbook as well.....you will love it!!

I like very much the 3 boats, composition and sketch are pretty strong.