A DAY IN MARSEILLE

Hi!
Marseille is one of the biggest city in France, (the second after Paris and just before Lyon), built by Grec sailors 600 BC years ago, on the  mediterranea cost.
Many french people will associated this city to Marcel Pagnol (a really famous writer from the beginning of 20th century). He has contributed to make Marseille very popular with a theater drama taking place in Marseille, followed by movies adaptation.
But Marseille is also a city with a great history.
Attached to the Roman Empire in the 2nd century BC, the sea port used to trade with many Mediterranean countries and also a part of Asia. .
It was there that Knights left France for Jerusalem cruisades (after the year 1000).
Today, the city is still reflecting this historic past when you walk in the streets.
In 2013 Marseille will be the culture's european capital.

on the first drawing, you can see the Basilique "Notre Dame de la Garde" concidered by marseillais (people living in Marseille) as guardian and protectress of the city. 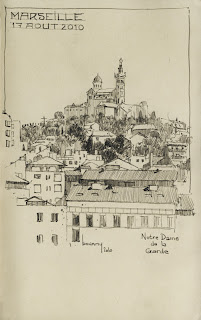 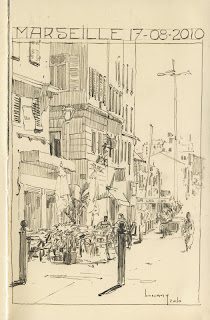 Sir, your sketches are jawdroppingly amazing...

Thank you guys! I appreciated!
Guillaume.

I love your drawings...what is the brand of the brush pen that you used?