MORE FROM THE ATLANTIC COAST

More sketches from Pornichet.
This time, I had the opportunity to draw the cost from the sea ,  the tide was low

The last sketch was done in the village called Kervalet. It's an old city built in the 10e century by salt's workers. Located near the pond salt  where they worked, the "paludiers" (salt's workers ) were living in the smallest houses. The others, with one floor are the houses where the "Sauniers" (workers transporting the salt, according Wikipedia) were living.
They are builded with stone granit and slates on the roof. 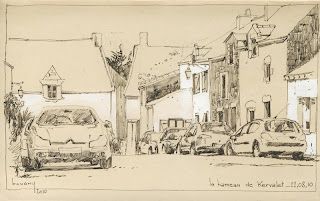 Amazing how you can get a reaaaaally niiiiice drawing from any landscape you see around! that's art, isn't it?

Great sketches Guillaume....really like heavy darks on the top piece.

great sketches! What kind of pen/marker are you using on the top sketch?

Thank you so much for your comments!
The one on the top was done with a brush pen "pentel".
Ghislaine, merci pour ce sympathique commentaire, cela me donne l'energie de toujours vouloir donner le meilleur de moi pour ce blog!
Guillaume.